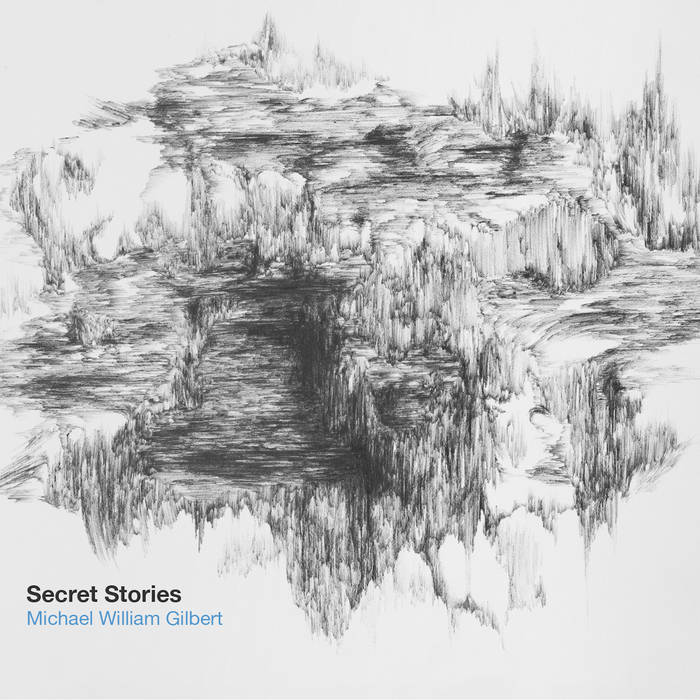 MW Gilbert’s “Secret Stories” (GIBEX CD 007) is his eighth release as a composer, and his most complex project to date.

“After years of just working in the studio, and creating music that existed only on recordings, I wanted to concentrate on music that could (at least potentially) be performed live. This gave me the opportunity to create a number of virtual ensembles, and set the individual tracks within the contexts of the ensembles.

The pieces “In Transit”, “Dream Within a Dream”, “Secret Stories”, and “Flying by Night” are composed with a good-­sized electro-­acoustic band in mind, one that I do not think I have the chops to play in myself. “In My Own Sweet Time” is definitely for the jazzier version of that band!

“Sometimes I See the Sky (2nd Version) and “Traveler (for Dan at 30)” are composed as a sort of chamber music, albeit with a few electric instruments added. “Traveler” was composed for my son Dan Gilbert for his 30th birthday, and the arc of the piece is a tribute to him and the arc of his life to date. “Sometimes I See the Sky “ appeared first on my CD, “I Can See from Here”, and while I have only rarely re-­recorded compositions, I think the revised and newly recorded version captures the chamber/performance aspects of the piece in a much better light.

“People of the Voice” and “Escape Velocity (for Bob)” are both truly electronic music, in the sense of the term that I grew up with and the techniques I learned while studying. They remind me of my earlier music years, during which I both gave and attended many ‘tape concerts’. While possibly very daunting to perform live, these compositions are a complement to the ensemble pieces. “People of the Voice” came out of my feelings of anger and sadness for the needless suffering of innocent people, especially children, on all sides of the multiple conflicts in the Middle East. It is composed entirely with voices and vocal samples, with the exception of a single, angry, electric guitar.

“Escape Velocity” is composed in memory of my late brother-­in­-law and friend Bob Gladstone. I miss him, his thoughts and ideas, and our many conversations both serious and not so serious. He had a hard fight at the end, and I imagine him finally attaining the escape velocity necessary to release him from the orbit of his corporal existence. His molecules are out here and there, blending with those of Shakespeare, Ernie Kovacs, and Bessie Smith.

This one’s for you, Dad - Andrew Gilbert (1922-1985), who did not know what “World Music” was, but played all sorts of the world’s music for me often and enthusiastically while I was growing up!